skip to main | skip to sidebar

Recently I've had to say goodbye to two entities I cared for very much.

The first, everybody knows about already. We are in the process of turning off Google Answers, my first Google project. The project itself is one of my proudest achievements: bringing together lots of really interesting people to generate high quality content about a broad range of topics. The reasons behind the closure are (as always) complicated, and confidential, but even though I haven't been actively working on it in a while, I had hoped something better would come of it. But sometimes you just can't make the right thing happen, even when it's your baby. So now we close the year-end books, put up a readonly copy of the site, finalize some AdSense details, and watch the last questions expire, until the dashboard finally says '... 0 unanswered questions.' The second is Clyde. Clyde was our eight-year-old ferret, who had been diagnosed with insulinoma about a year ago. Eight is really old for a ferret, and this diagnosis would normally mean only a month or two to live, but he hung in there for a long time. He was active and in good spirits up until a day or so before his passing, and was still capable of getting into all kinds of mischief. He'd gotten very cuddly near the end and was happy to be held and fed treats. I know you're not supposed to have favorites, but he was my favorite of the ferrets. It wasn't unexpected, but it was still hard to say goodbye.
Posted by Lexi Baugher at 9:56 PM 6 comments: 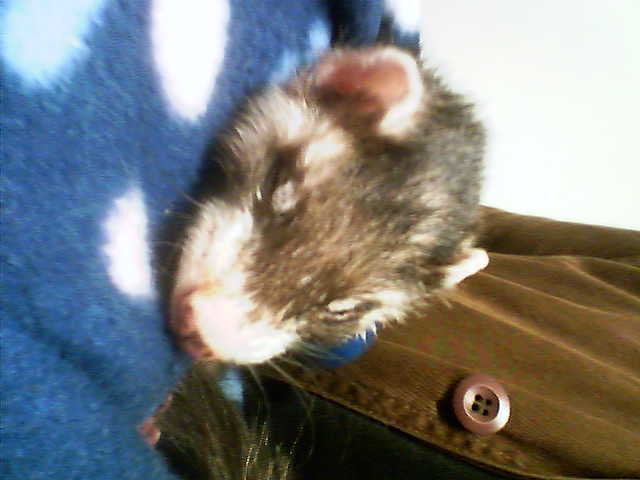